Abstract is a brief description of the paper, which includes the relevance, the formulation of the problem, the ways to solve it, the results and conclusions. The recommended length is 180-250 words in Russian and English.

When writing the abstract, you should pay attention to the following:

• include a description of the main topic;

• write briefly and in a substantial manner;

• bring up the essence of the work without going into the key details;

• do not repeat the text of the article itself and the information contained in its title;

Deposits of ice-up, frost mist and wet snow on the wires of the traction network can lead to the following negative consequences: misalignment and convergence of wires; intensive line wire dancing, with short circuits occurring as a result, damage of linear armature and fasteners; Mechanical overload and wire breakage, breakage of traverses and brackets; The destruction of supports during the strong winds and the presence of ice deposits. Thermal, mechanical and chemical methods are used with ice-up prevention. Thermal ones include preventive heating of wires and ice melting.

The effectiveness of thermal methods to prevent ice-up can be improved by developing techniques for planning the heating and melting regimes based on computer simulation. Such a simulation can be implemented using methods for determining the modes of traction power systems in phase coordinates developed at the Irkutsk State Transport University.

The article presents the results of research aimed at creating technologies for computer simulation of the modes of controlling ice deposits by heating wires with currents that arise when powering a section of the contact network from different phases of the traction substation.

On the basis of the results obtained, the following conclusions are formulated: when feeding the contact network from different phases of the traction substation, the currents of the wires increase significantly and cause substantial heating of the wires, sufficient for effective melting of the ice-up; in the powering mode of the section of the contact network from the different phases of the traction substation, the voltages on the current collectors of electric locomotives were within the permissible limits; the coefficients of unbalance by reverse sequence on the buses of the primary voltage of the traction substations did not go beyond the normal allowable ranges; the growth of currents running along the wires led to an increase in the strength of the magnetic field.

The proposed technique for modeling the powering modes of contact network sections from different phases of the traction substation can be used for planning ice-up control modes.

The problem of increasing the efficiency and stability of the operating mode of vibrations of vibrating machines is solved. A mechanical system of inertial type is considered, in which regimes of multiple combination parametric resonance are implemented. It is shown that, for the existence of oscillations, it is necessary to fulfill the threshold excitation condition, which depends on the friction in the oscillatory system, the excitation coefficients and the natural oscillation frequency of the pendulums. In addition, the use of an elastic isotropic suspension to excite circular vibrations of the working element reduces the excitation threshold by a factor of two. A decrease in the coefficient of the natural frequency of the pendulums doubles the excitation threshold by a factor of three.

The results of the research allow us to develop design and technological measures for the development and creation of vibrating machines for technological purposes with a stable resonance mode of operation.

Journal has been published since 2004. 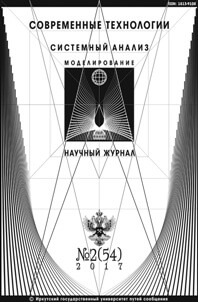